They do happen! Life happens and many times there’s little we can do about the circumstances that enter and take command. It’s the unexpected that gets us most times as we’ve learned to deal with day to day situations that are cause for only minor ‘angst’.

I’m taking this focus today because some “circumstances” have rattled my spiritual chain. In religious language one would say “troubled my spirit”.  And the troubling is major when folks give more credit to the “enemy” than to our heavenly PAPA. Why? Because PAPA is all mighty, all powerful, all present, all knowing and always in charge.

It’s our mindsets that get us in hot water and ruffle my spiritual feathers.  In fact, the same occurred years ago when I was in training during the 10-month no-job life period.

It was 1983. I was at my sewing machine making clothes for the girls because funds were tight. But my mind was on what I was hearing constantly from my well-meaning evangelical friends. They were always talking about the enemy this or the enemy that. If they didn’t want to attend prayer group, it was because “the enemy made me do it”. If they didn’t have a nickle to spare, it was the “enemy’s fault”.

To be honest, it was not only causing me spiritual angst, it was a source of considerable confusion. After all, I knew PAPA to be in charge of everything and no entity was His equal. So I asked the question of Him as is my usual course of action.

Knowing me to be a visual thinker, He brought an image to my mind’s eye. Jesus was standing afar off. As my mind zoomed in closer, I noticed that He had His left arm behind His back. The 2nd zoom revealed a transparent Jesus holding the enemy firmly by his tale. I laughed out loud!

“Read the book of Job, my child!” So I ran downstairs and began reading the prologue to the book of Job. Sure enough PAPA and the enemy were having a conversation and PAPA gave permission to the enemy to test Job (I’ve always said “Job was a woman”). Throughout Job’s ordeal, his friends gave him advice. Even his wife told him to curse God and die. Although Job questioned God, he never wavered from his faith and in the end PAPA restored all to Job many times over.

This experience cleared up the angst and confusion in one fell swoop. And I understood that PAPA is always in control and that those who always say “the devil made me do it” were probably looking for a convenient excuse. Or they were not renewed in mind to this point as yet.

Here’s what the above taught me that may be helpful to you as you seek to grow spiritually as well as emotionally and psychologically:

1. PAPA God has ALL the power. Yet He deliberately limits himself.

2. He desires to be in a co-creator relationship with us. He does His part and He asks us to do ours. As much as we humanly can (“do all that you can [humanly] and then stand”).

3. He takes a step and then we’re required to take a step. And many times He won’t move until we do!

4. The only thing the enemy can get a hold of is our minds. And then can only mess with our minds in the parts that are not yet renewed (“be transformed by the renewing of your minds”).  I’ve come to understand that means to let PAPA have charge of our minds so He can remove old tapes and replace them with His new ones.

5. Since PAPA has the enemy under His control; the enemy can only do to us what PAPA permits. And then it’s usually “for us” rather than against us.

Now you may be asking “what about life’s BIG circumstances? 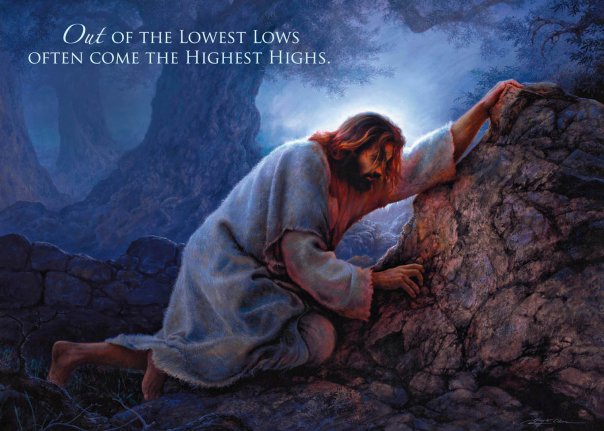 The kind that reel us in ways that takes months and years to recover. Like the loss of a significant person in our lives. Circumstances for which we have no answers and PAPA doesn’t seem to be committed to explaining them at the time.

We are after all human. When we come to relationship with the Lord and our PAPA, we don’t give up our humanity. And since PAPA chooses to limit His all-mighty power; we’re going to experience circumstances beyond our control. The driver who chooses to drive under the influence hits and kills someone dear to us. A mentally ill relative kills our neighbors – his beloved wife, aunt and uncle. We’re rocked on our heels – many times for the rest of our lives.  We don’t understand “why” and may never know until we reach our heavenly home.  But the point is that we are human and humans make bad choices. Even those of us who have come into relationship can make choices that are not in our best interests – or that of others. I seem to remember that Paul said all things are lawful but not all things are good for us!

The point of this post is less about how to handle life’s circumstances and much more about giving credit where no credit is due. Speaking the name of the “enemy” far more than giving honor where honor is due – PAPA God.

This is an exceedingly important subject so I may continue this in a 2nd Sunday Series on Wednesday for those who’d like to know more. In the meantime, open you heart and mind to PAPA and let Him erase the faulty stuff and replace with His wisdom which is always the very best He has to offer.**

Question to ponder: If He Who did not spare His own Son. . .

Images: Coalst (excellent read that fits right in with this post) & IBibleVerses

** When in the “renewing mode”; what PAPA gives us will always line up with Scripture. And we must have someone wiser and more mature in the Lord as our guide, mentor, spiritual director to make certain what we’re learning lines up with Scripture.
Posted in Life & Business

I have a fiery passion to see women become all they are designed to be - personally and professionally. I write, teach, mentor and coach with that passion in mind. As an author and prolific blogger, I reach out to women in all walks of life, especially women of faith to empower and equip them for greatness.